Its funny how things work.

Last August, after reading a good Brothers now removed blog, I was inspired to use my tuxedo for something other than conferring Masonic truths and I bought some tickets to the Metropolitan Opera in New York. I thought it would be nice to dress up and take the wife into the city for some operatic enjoyment and perhaps a good dinner. I carefully perused the titles for something that might be fun for us both. I finally decided on Tristan and Isolde, figuring a tale of an Irish princess would be good for my first attempt at the opera. I also bought three tickets to Mozart's The Magic Flute to bring my daughter to her first opera. Now I know some may say that a five year old and opera are two things that shouldn't be combined but as I was surfing through the HD channels one day I came upon a broadcast of The Magic Flute and my Masonic curiosity overcame my aversion to opera and I started to watch it and my then four year old was transfixed. I enjoyed figuring out the masonic allusions and she loved the singing and wonderful costumes and sets. I soon realized that I liked it too and fast forward to buying tickets.

As a man and husband I have a general idea of when the holidays are just not the exact dates. I know Thanksgiving is in the twenties of November and Christmas is on December 24th or 25th. My wife is from Kentucky and that means packing up the kids for a loooooong drive on or near one of those dates. Due to extenuating circumstances we have enjoyed the last two years of holidays at our home in Connecticut near my family, soooo it was decided that we do the two big holidays this year down below the Mason Dixon line. Now back to the opera.

After I bought the tickets I announced to my wife that I was taking her to the opera which received a mixed reaction when she asked me when. I said we are going to see T&I on the 28th of November to which she said we would be in Ky so you'll have to get rid of them. I also announced that we were all going to the Magic Flute on December 22 which was also unpopular because that would be right around us driving back down there again. After some clearing of minds I agreed to get rid of the T&I tickets and we would leave for Ky after seeing the Magic Flute. Thanks to the wonders of a certain "list" I was able to sell the T&I tickets at a very small loss and looked forward to the Magic Flute. Rewind to just a few days ago.

My one year old who had been fighting two ear infections came down with a stomach bug on top of it all. The next to go was my wife (who never gets sick) and then my 5 year old. Leaving me to clean up all of the wonderful things expelled while battling the evil stomach yuk. I had somehow avoided it and hoped upon hopes everyone would be better for the opera....of course they weren't and I was forced to donate the tickets back to the Met so they could resell them and so went my attempt to elevate the cultural level of my family. Which brings us to the current day.


We made the looong journey down to Kentucky in what was good time until we crossed the state line and a batch of freezing rain that shut down I-64 for over an hour and forced us to travel the final two hours of our trip at a snails pace. Which turned the final two hours into five and somewhere in between let the evil stomach funk grasp me in its wicked tendrils to leave me holed up in my wife's old room for the past two painful days.


On a good note I have used my time in exile to catch up on all of the Masonic blogs that I had missed reading for the past month and I have to say it was good to be among "friends" again.
Merry Christmas.
MMM
Posted M.M.M. from the North Eastern Corner at 8:11 PM 2 comments:

I have not posted in what seems like an eternity and there is due cause.

I recently lost my job of 11 years and started a new one, very different from what I was doing. A big change.


I re-enrolled in college after a 8 year hiatus and have been busy studying and writing papers. Another big change.


As always, I have my little family to attend to, and there has been a lot going on at my lodge so I have had little time to write to my dear Blog.


Tonight, I was installed as the Senior Warden of "Old St. Johns" at a building that was not the one that had pulled me like a magnet to the craft, and it was a great night because it is not the brick and mortar surrounding the Brethren that makes the lodge it is the men themselves. 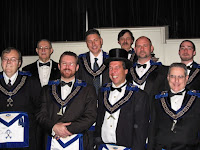 My lodge is regenerating. We raised 8 new Brothers while I was JW, and what really matters is that we are starting to bond together into the Brotherhood the craft was meant to be. The vibe at our meetings is increasingly positive and I can't wait for the next meeting nowadays. Our nearly 250 year old lodge is moving into the 21st century at, and forgive my Spaceballs reference, ludicrous speed!

We have a goal, we have a plan, and we are starting to gather the laborers to meet our dreams. The work is starting and the trestle board is full.

Thank you to all who have supported me through my "dimmer" moments of the last year. I am looking forward to bigger and better things.

Hopefully soon, after the adjustment to my new schedule and responsibilities, I can resume, more often, my exploration of the deeper meanings of my order and write of the great things we will accomplish in my year in the West.