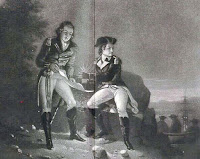 You know that scene in Braveheart

when the big battle is lost and he charges after the helmeted knight and is knocked off his horse and plays dead to entice his enemy off his horse then springs up on him pulling off his helmet ready to slice his throat only to find his "friend" Robert the Bruce behind the mask. I thought Mel Gibson's interpretation of betrayal was so powerful and true. Bewildered, sad, confused, defeated he stumbles back trying to make sense of his world gone upside down and lays down in surrender. The Bruce then finds his moral compass and helps him escape but it is too late for the cause.
Trust is a mighty thing. It is something you give selflessly. When broken it can often never be returned.
Connecticut's most infamous son could have been one of its greatest heroes. Benedict Arnold was born in Norwich Connecticut to a long line of Benedict Arnold's including a former Governor of Rhode Island. His father B.A. after some unfortunate business dealings sought the solace of the local tavern, so young Benny was sent off at an early age to apprentice at his cousins large and successful apothecary. His early life was adventurous and successful and eventually he ended up in New Haven Connecticut with his own apothecary and became a merchant trader in Canada and the West Indies where it is believed he became a Freemason. He soon affiliated with Hiram Lodge No. 1 in New Haven, Connecticut's oldest lodge. When he heard of the Battle's of Lexington and Concord Arnold marched off to battle. His heroics and exploits are many and as the Revolutionary War progressed he quickly rose up the ranks of the Continental Army. If his story ended here he would be spoken amongst the founding fathers with reverence due but alas, greed or vanity and or a combination of insults drove him to his path of infamy and his betrayal of his country he fought and was wounded for.
What causes a man to betray a trust given to him? It is said that his fellow Freemason Brother George Washington, who had given Benedict the post at West Point where he was to be caught trying to sell its secrets to the Redcoats, was calm upon learning of the betrayal of his friend and Brother, I wonder what his face looked like.
Washington did perform a thorough investigation into his betrayal and tried to make a trade with the British in order to bring him to justice and even tried to have him kidnapped but Benedict escaped and eventually fought as gallantly for the Red Coats as he did the Patriots, but died virtually unknown in London where he is buried due to clerical errors in an unmarked mass grave.
It is kind of sad when someone you have put faith and trust in betrays you because you know that person well and you almost want to figure out how to justify their action in order to save that was lost but it will never be the same.
Subterfuge regardless of the reason is subterfuge.
Posted M.M.M. from the North Eastern Corner at 11:18 PM 1 comment: