Return of the Masonic Bling Fever

Every illness when it strikes a second time hits harder and lasts longer and can have debilitating effects on its recipient. It took long hours in therapy and a hard rehabilitation to get over my first case of Masonic Bling Fever (MBF) but eventually I was able to pass over ebay from my bookmarks without getting the shakes. My curio cabinet and my bank account healed and I was a normal member of society again....then I became a Past Master!
Since I no longer had a major part in a recent degree at lodge and do not have to study ritual any more I found my self nonchalantly searching for a Past Masters ring on ebay, amazon, google. Like my first case of MBF it innocently starts with a ring search then I realized I needed a new emblem on my truck, a new lapel pin, formal wear, trailer hitch, you name it since I was now entitled to wear a new kind of symbol I needed to put it on everything. It is crazy. The only difference between this bout of MBF and my last bout of it was that I was gainfully employed and had only one child with my first infection, this time I don't have a job and have three kids, so the ease at which I can confirm a bid or complete a purchase is greatly diminished if not in fact stopped right in its tracks.
Another problem with a re-infection of MBF is that the Past Master stuff is way more expensive than the regular square and compasses stuff, but the hunger remains.
Luckily I was given an Amazon gift card for Christmas so I was able to relieve the symptoms with a new book, The Beauty and Glory of the Day: A Masonic Devotional.

A very good Brother of mine has been toting a well worn and dog eared copy of this very good book along with him for a while so since it was within my means I got myself a copy. It is a very short and sweet book and totally focuses the reader on daily spiritual reminders and prayers of the working tools of Freemasonry. Unlike the multitude of other Masonic books in my library that exploded in my last bout of MBF this is not a history or exploration but a practice book and fits right in to my new role as Chaplain and PM.
I must get by every day just browsing until the fever ends by running its course or until I win the lottery and buy the ring above which would kill the infection much faster!
Posted M.M.M. from the North Eastern Corner at 11:17 PM 3 comments: 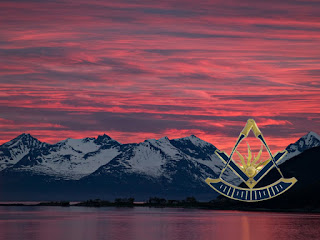 On Thursday night this week my reign of terror term will end and the oriental chair of "Old St. Johns" will be occupied by another and I will officially don the title and mantle of a Past Master. I can now join the succession of men who can sit on the side lines and complain about how it was back in my time.
Oh they were the good ol' days.
In the days leading up to the election of the lodge I had been asked by a number of Brothers both senior and junior if I would remain in the East for another year and I told them all, if I were elected again I would certainly serve, although I would not put myself out as a candidate because of the amount of time it has taken away from my family. In the end it turned out to be quite an interesting night because for the first time in a long time no one knew who the three principal officers were to be. The progressive line was not in order and when the dust settled my Senior Warden was elected to lead the craft for the ensuing year (much to even his dismay as he wanted me to remain also) by a narrow margin.
So..... at our next stated communication he (my SW)will be installed and I will be uninstall-ed so to say and I pass on to history.
My year saw many popular changes and many things that may have been endured only because of my force of will. I believe I adhered to the utmost the landmarks of our order and used my time as Worshipful Master to lead my lodge and not sit in a chair until the next man would endure it. At times I know there were a few who did not want a Master that led, they really liked the ones who went through the motions, did some degrees, and generally did not stir the pot. There were also those that loved every minute of my term and were very, very sad to see it end.
I felt as if a weight had been taken off my shoulders and pinned to my chest instead. I poured my heart and soul into the lodge as I had been doing since I first joined it, but for one year it was mine and it shined like the top of the Chrysler Building! I can only hope that some of the things I fought for and all of the things that I introduced will remain but there is no certainty in things. I will do my best to mentor my successor and I hope with all hopes that he can continue the success we have all worked so hard for.
It will be a bitter sweet night on Thursday and it will be tough donning the mantle and title of a Past Master.