Recently I was having a discussion with my Worshipful Master about the new database I was creating for the lodge. I was entering in the names, addresses(physical and electronic), phone numbers, and birthdays of our hundred or so members. When it came to the three dates important to us Masons the date they were initiated, passed, and raised, I chose to enter just the date of their Entered Apprentice Degree (in the interest of my time because it was a lot of data) because I felt it was the more important date in the history of a Freemason. My WM strongly disagreed with me saying the date of a Brothers raising is the much more important date and that it is the date most lodges commemorate. I still disagree.
My argument is that the day you are initiated is the day you became a Mason. Yes, the night I

was raised to the sublime degree was one of the most memorable in my life, but not as important as the night I was initiated. You can not become a Master Mason, or a Fellowcraft for that matter, without that most important step of being made a Mason. I will always remember being brought to the North East Corner of the lodge and being told by the WM that I then stood a just and upright Mason and forever to walk and act as such. It is such a powerful moment in our ritual and one of my favorite parts of any degree. Before you were just a man, a regular Joe Sixpack, but after your initiation you are a Freemason and have an important image to live up to. Not every man is an EA but every MM is one.
What do you think?
What date would you rather commemorate in your Masonic life?
What date does your lodge hold more important? 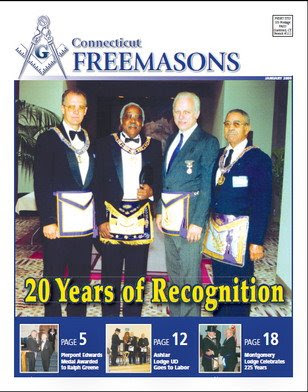 This months issue of my Grand Lodges newspaper contains the first installment of the story of how some brave Freemasons on both sides of the color line took the first courageous step towards the true Brotherhood promised in our ritual. It was a milestone and turning point in American Masonry and with all that is happening in our country today it is important for us to realize that only a short 20 years ago "mainstream" Freemasons and Prince Hall Freemasons did not recognize each other as Brothers. The story in the paper linked to above, left me excruciatingly wanting more and I, of course, will eagerly anticipate the next installment.
Although American Freemasonry has taken many more steps since the two Grand Lodges in Connecticut decided to recognize each other, we have still not reached the summit of universal Brotherhood across the Nation.
We are all Brothers.
I have written many times on the subject of Prince Hall recognition and have clearly made my opinions in the past so I will not repeat them again, but I will say that I am especially proud to be a Connecticut Freemason during this anniversary year and hope the Grand Jurisdictions that have not lived up to their Brotherly obligation will see the LIGHT.
On February 5 my lodge will do something that has not happened in its 244 year history, we will initiate an African American man into our brotherhood. If you remember back a year ago I was struggling how to broach the division in American Masonry with a certain potential candidate. I wanted to explain to him the existence of two Grand Lodge systems in my State for informational purposes without coming across as some kind of racist and thanks to the help and advice of some very wise readers I did it successfully. I laid out two roads to the same Brotherhood and he, thankfully, chose to follow the same one I did and join me in the labor. Although it has taken much longer that I thought it would due to scheduling conflicts, I am thoroughly excited to finally welcome him into the order not because of the color of his skin but because he is a good man, husband, and father and I will be honored to call him brother. I want to belong to a lodge of all men and we are on the way towards that lofty goal.
Twenty years ago the Grand Lodge of Connecticut and Most Worshipful Prince Hall Grand Lodge of Connecticut took the first step towards a color blind Brotherhood and agreed to recognize each other and allow inter visitation. Proud traditions and long histories are the more innocent reasons that there are still two Grand Lodges in my state, perhaps, like the Ancients and Moderns in Masonic history who, despite all of their differences were able to unite as one, some day there will be a United Grand Lodge of Connecticut where both Prince Hall and "regular" Masons will labor together under the same banner.
I can dream can't I?
Posted M.M.M. from the North Eastern Corner at 11:36 PM 1 comment: