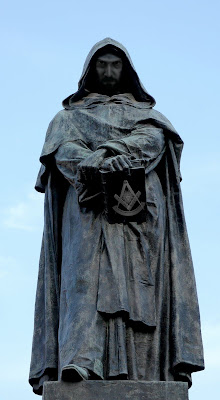 This has and will always be a personal blog about my journey into and around Freemasonry, albeit a somewhat anonymous one. I have always been candid and frank about most of my experiences. I have written things that I probably should not have and have held back some things that I should more than once.
Apart from some minor posts in the last year my writing has all but dried up like so many other Masonic bloggers around what was once a very exciting and vibrant group of like minded individuals.
For me the muse that once fed my fervent prose has gone.
Like many men before me, I was a seeker of light and discovered the ancient fraternity out of a combination of deep need and heady research. There are many outlets available for a man to dedicate his time and energy to and my spirit was drawn, like a moth to flame, to a brotherhood represented by two builders tools locked in an iconic embrace.
I have stated numerous times and in way too many ways on this site of what I found when I approached and passed through the West Gate on my way to the East. I dove in head first following my heart and the providence that led me to the ancient craft. Like an infatuated youth the order held my thoughts every waking minute and my dreams at night. In retrospect I am ashamed at how much of my energy and valuable thoughts were taken away from my precious wife and children by my devotion to Freemasonry, but that is how my personality is, I do not do anything half way.
So where am I, you might ask.
Well, last spring I finally got a job equal to my skills after a long drought of layoffs and part time work. My new job has eaten up allot of my time and energy but at least I am getting paid well for it. Masonicly I have not stepped foot in my lodge for over a year now. I have kept up with what has been going on there but the last time I was at lodge it was made crystal clear to me that what I had tried to do was not wanted or appreciated. I had attempted to demit but was talked out of it and have questioned my decision ever since. My thoughts and ideas of what lodge I would like to belong to has completely changed and my old lodge fits none of them.
Others who followed me in the idea of a "different kind of lodge" have also dropped off and although I had nothing to do with anyone's decision directly, the blame has been laid at my feet. In fact at the most recent election (of which I could not attend because I was hundreds of miles away at work nor any intention of going to anyway) the rumor that was murmured around the room was that I was going to show up out of nowhere and "start some trouble," like some phantom menace....Oh my god I am Voldemort!
Just hearing of what has been said in my absence hurts me to the core and the idea of what was accomplished in the five years of my dedication to a positive idea as being labeled "trouble," has led me to believe that my continued support of men who do not want it is unwarranted.
Under my Grand Lodges rules and regulations a brother may demit form his lodge if his dues are paid in full. I would then receive a certificate of demit which would make me a kind of unsigned Freemason free agent. The ramifications of this decision are heavy especially since I am not a member of another lodge and my "regularity" would be in question. I don't know what to do, but I no longer belong to the group of men who I called brother for so long...at least not all of them.
Over the past year I have received numerous calls and emails from the readers of this blog that have lifted my spirit and cemented my decision in joining Freemasonry in the first place. If it weren't for you, or this work of love, I may well have just given up on the craft altogether. I still wear my ring although lately I have gone days without taking it out of the small jeans pocket where it resides when not on my finger.
My questions still linger. My spirit has taken quite a blow.
There is much work to be done.
Posted M.M.M. from the North Eastern Corner at 3:40 PM 7 comments: