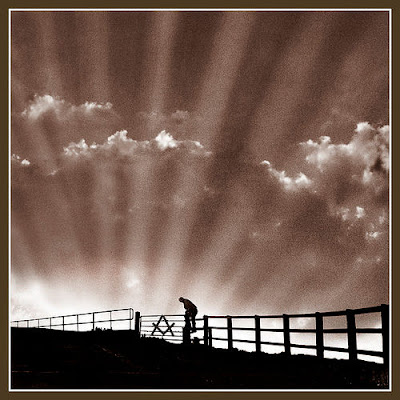 So what comes first the lodge or the "lodge"? As most Masons know a lodge is a group of Freemasons, it is constituted (or licensed in layman's terms) by a Grand Lodge and given the power and authority to make Masons. As most non Masons and Masons wives know a "lodge" is the building that Freemasons go a couple of times a month to meet and do that "secret" stuff. In early times the lodge was formed without a "lodge". Freemasonry grew in pubs and coffee houses and any other place that could be Tyled or secured from non Masons in order to do the work of the order. As Freemasonry grew the "lodge" became a new reality, lodges swelling with members who wished to donate their time and money built edifices that reflected their love and devotion to their craft. Magnificent structures were constructed at a time when Brothers had a lot less means than todays masons, but built they were.
The building that caught my imagination and helped to draw me to the lodge of which I am Master today was sold, like many "lodges" were, because the big white elephant was too expensive for the dwindling brotherhood that met there. It is an amazing structure with stained glass Masonic windows, brass door hardware with square and compasses emblazoned on every handle, and a ceiling painted to match the canopy of heaven, but it is not ours. Yes we meet there but someone else owns the building and they are not going to give it up in the foreseeable future. We are uncomfortable tenants doing the labor of Freemasonry in a museum from the past. When we retire to the South for fellowship we must bring and remove any evidence of our existence and never feel comfortable in our camaraderie.
My dream for my lodge is to get us back into a "lodge". I want a place of our own. I want a place where if a couple of Brothers want to discuss things over a cigar and a dram of whiskey they can do so. I want a place where we can leave supplies to make the dinner we consume before a degree. I want to have a piece of property that the Brothers can be proud to bring a prospective candidate to. Is this wrong? Am I spinning my creative wheels on a thing that is more trouble than its worth?
I have found a building with a fraction of the grandeur of our old "lodge" but it still has the possibility of grandeur. This building is within the money we collected for the sale of our old building and then some. We should have enough money to purchase and renovate and put some money away to help us in the early years of ownership. But even with all of these qualities the older guys at the lodge are scared to own property again.
I think that a "lodge" would help my lodge in retention and growth because it would be a place we could all be proud owners of, but is this not the case? Does my idea of a "lodge" like the royal society, a clubhouse for the Brethren, not fit in with the reality of modern American Freemasonry? I see places like Halcyon Lodge and what they have done with their old building and think that if we had that we would be so much better off. Am I wrong?
What do you think?
Posted M.M.M. from the North Eastern Corner at 11:09 PM 2 comments:

Which Way Do The Compasses Point? 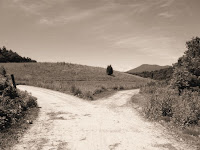 The road is bumpy, the road is winding, the road is long and then you come to this.
When you are traveling on a road to somewhere the bumps jar, the turns sway but the traveling is still easy because you don't have to think really, you just keep moving. The fork in the road is hard because you have to decide. As far as you know both paths lead to a similar destination.
On the left there is a downhill road through a dark forest. It is an easy way to go but the light is obfuscated and diffused and you will have to turn on your headlights and shine the light as you go, but you will save gas and get there sooner.
On the right there is an uphill road over a high precipice. It is a much harder road to travel and you will have to really pay attention to the road but the light will be shining on you and the view could be breathtaking.
You get to the fork and you stop, car idling away. One passenger really thinks the easy road is the way to go, save gas, get there sooner with much less effort. The other passenger is just as adamant about the hard road, it'll cost us more and be a lot of work but just imagine the view. You were the one who found the scenic route and convinced your friend of its merits but the longer you drive the more the easier route calls to you because you want so bad to get where you are going.
Neither friend wants to push you too hard in their direction but are still insistent of their opinion. So with the radio on keeping you entertained you sit there and wait because you cant decide.
If you didn't have passengers you would go the hard scenic route or would you?
Posted M.M.M. from the North Eastern Corner at 10:06 PM No comments:

The Joy Of Building 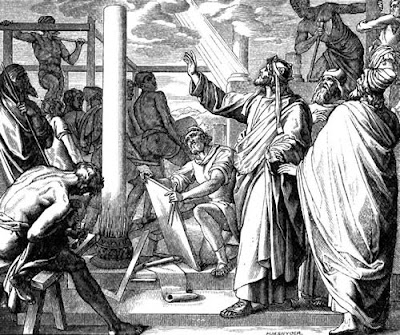 The best thing about being Worshipful Master is being able to take things I had only contemplated or wrote about and making it into reality, tonight was one of those great nights. For those of you who read this blog you may recall at the end of one of my posts about an idea for a lodge "building" night I called "Mix The Cement Night". The basic idea of the program came from an experience at our Grand Lodge's Wardens Seminar I attended in October of last year. We were separated into pairs and caused to interview each other as a team building experience, I took this idea and came up with "Mix The Cement Night"and it was a tremendous success.

I snuck the event into my Message From the East and did not give any details about what it was going to be, knowing that none of the Brothers of my lodge really reads my blog so it would be a complete surprise(as it turned out one of the newest Brothers had read it but kept it a secret). I started receiving calls about it the day after I sent out the Trestleboard and would not give the slightest idea of what it was to be, which heightened the anticipation.

I arrived this evening, fashionably late, to a full parking lot and a bunch of Brothers quite enjoying each others company already, which just made it that much better. We quickly opened lodge and disposed of the good business of petitions and returned investigations, then I put the lodge at ease so I could explain what we were about to do. I explained the esoteric idea of the night and knowing my lodge as I do split the Brothers up into pairs of "old school" and "new school", so to say, and gave them a nice questionnaire to conduct the interview. Name, Family Members, Why You Became a Mason were some of the questions on the sheet that I explained to the Brothers should be used as a template to know your Brother better. I then promptly closed the lodge and we adjourned to the dinner hall for the exercise.

We all grabbed a beverage of choice and the fun began. I wanted to limit the time of the interviews to 15 minutes a piece so we would have enough time to hear everyones answers but to my pleasant surprise I was asked for a little more time. The buzz in the air was music to my ears as everyone got to know each other a little better and then I started by introducing my Brother the Treasurer to the lodge. I then went around the room and randomly went back and forth between old and new and had every Brother tell us a little more about their Brother. The stories were great, the camaraderie was amazing and no one was in a rush to leave afterwards! The best part of it was that we all knew each other better than we had ever before and left more cohesive and happier than we came, TRUE BROTHERHOOD.

The cement of personal knowledge was mixed into the aggregate collection of men and turned into a concrete foundation of a Freemasons Lodge. It just doesn't get any better.