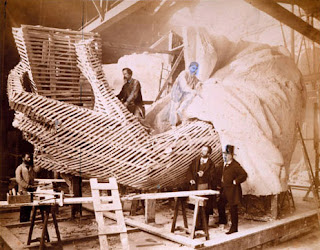 I think that there is one thing that all Freemasons can agree upon. Freemasons agree upon something...that is preposterous, I know you may say, but yes I think I know one thing that is truly universally appreciated in our fraternity. It is something that unifies us into a congruous mass of men, freely traveling this time and space. It is something that will uplift the most despondent brother or make the quietest mason suddenly talk with a smile on his face...

My daughter was elated all week long and the night before our trip she could not sleep. The third grade was going into the city to reinforce their current study of immigration into the United States by spending the day at one of the most iconic of all symbols, the Statue of Liberty and Ellis Island.
The copper giantess holding the torch of freedom as a beacon to the world is, in my opinion, one of the greatest monuments ever erected on this planet. The huge statue was not erected to memorialize a king or leader, or to mark the place of a significant battle. No, this colossus was envisioned by men from a country founded upon the same enlightenment ideals as the United States, as a gift to uplift America during its most trying time, the American Civil War.

The idea for La Liberté éclairant le monde (Liberty Enlightening the World), the statues original name, came during a dinner at Édouard René de Laboulaye's home in France. Laboulaye was a law professor and politician who was a tremendous admirer of the American Constitution. This dinner was attended by many Freemasons including the Marquis deLafayette's grandsons Oscar and Edmond, Henri Martin a historian and prominent Mason, and a young artist Frédéric Bartholdi, a member of Lodge Alsace Lorraine, in Paris.
During the dinner, Laboulaye said that it would be fitting that a monument to freedom be erected in the United States and that it should be a joint effort between France and America. The idea continued in conversations between Bartholdi and Laboulaye, but was delayed by the Franco-Prussian War and the politically repressive situation in France under Napoleon III.
After many years and significant monetary support from Freemasons in France, the Statue of Liberty was erected on an island in New York Harbor so that all who entered America could sail past a symbol of friendship and freedom.
So there I was, responsible for a few third graders for the day, not only for their safety but also the weighty responsibility of enlightening their minds. Us chaperons had free reign on how we spent the day with our kids once we landed on Liberty Island so as soon as the ferry hit the dock we were off. We quickly headed towards the back of the monument where we had run into a Bartholdi impersonator on our last visit here but he was no where to be found on this trip. I rambled on about the history of the statue and the Island, my daughter is used to my haughty historical side and I was worried that the other two kids might not catch on, but they were enjoying it just as much as my girl. We touched a stone from the quarry where the copper ore that was used for the statue came and the boy in our group kept noticing how the other groups just passed it by or stood on top of it not knowing what it really was.
It was a overcast day, there were not allot of tourists and we quickly breezed around the Island towards the front. We snuck into a tour group to hear what they were learning and took some good pictures under our lady then headed back behind the statue for some lunch.
All of the wrought iron tables were vacant as they still had some residual rain on them from the morning but we decided to sit at one anyway when out of nowhere a gentleman in a parks uniform appeared. he saw our table dilemma and without hesitation pulled out a rag to dry off the chairs and the table all the while asking the kids if they were enjoying lady liberty. I asked him what he did on the island and he told us that he was the keeper of the torch, the only one allowed to climb up the small ladder through the statues arm to take care of her beacon of freedom. It was such a special treat to talk to him that I had the kids take a picture with Louis Prosper. His kind manners and ebullient attitude left quite an impression on our little group and what a name for the keeper of the torch. He grabbed his hard hat that he had put to the side while he dried our eating spot and trotted off to the monument on his way to the top while we said thanks and waved goodbye.
Uplifted by our chance encounter we ate lunch, excitedly talking about our great few hours so far and rushed to the dock just in time to catch the ferry over to Ellis Island. We stood in the bow of the ferry and I asked the kids to imagine themselves sailing past the Statue and coming into Ellis Island as immigrants recently separated from their family and friends. The ferry approached the other island and we went downstairs to get first in line to get off and spend the rest of our day learning about the peopling of the United States.
I kept telling the kids to stand close and to pay attention and had my hand on my daughters shoulder when a man next to me said " I see you're a traveling man." He looked about my age, had a backpack on and must have noticed my ring.
"I certainly am Brother," I replied and we exchanged a friendly grip. He told me he was from a lodge in Brooklyn and that he worked in the museum on Ellis Island. I said how nice it always is to run into another Freemason to which he said I would be surprised how often he runs into brethren at the park. He then told me how he had helped organize a re-dedication of the corner stone with full masonic ceremony by the Grand Lodge of New York and New Jersey which must have been such an amazing experience given all of the Masonic connections with the statue. Before I knew it the ferry docked and my Brother was wishing us a great rest of our visit and bid us a fond farewell and headed into the building.
We spent the rest of the afternoon thoroughly enjoying exploring the beautiful building where so many people began their quest in America, including my own grandparents. My little tour group had a great time and learned allot.
So that's it.
I think that is the one thing all Freemasons can agree upon, because I see stories like this one all of the time on social media and they are always liked by all of the Brethren...being recognized as a Brother while traveling is awesome...that is why I always wear my ring....

And spending the day with your child learning and enjoying each others company is the greatest time spent in the world.
Posted M.M.M. from the North Eastern Corner at 10:53 PM 1 comment: