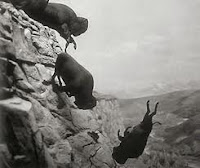 When a group is lead by someone who knows how to lead, success and happiness follow seemingly effortlessly because the leader does the work he was elected to do behind the scenes for the benefit of the group, this allows the group to concentrate its collective efforts on bigger and better things. When a group is steered in a definite direction they can imagine what it will be like to reach that goal and keep that thought as an inspiration to keep them going when the labor becomes hard and it takes hard labor to build something beautiful.
Bad leadership is not always done on purpose, but often comes from the attitude that the office of leadership in and of itself is all that it takes to lead.
A good leader builds.
A bad leader erodes.

Posted M.M.M. from the North Eastern Corner at 11:08 AM No comments: