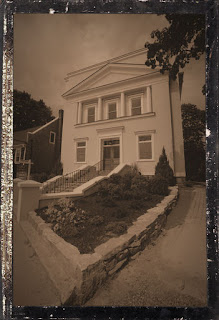 Whenever my little family needs a short vacation we often drive up the coast of Connecticut to the historic village of Mystic, made famous by the movie about a pizza shop

but better known for its historic seaport.

We love the quaint New England sea town feel and the fresh salt air and whenever we can't do a long vacation we often just head up there for a few nights away from our house. A few years back when still new to Freemasonry and without an I-phone, while looking for parking down a side street that followed the Mystic river, I came across this building which at the time still had Masonic emblems on it. It was quite impressive and had a direct view of the river and harbor within. Later that day, while waiting for some pizza, I tried looking up the lodge on my incredibly early version of a smart phone by attempting to view the list of Connecticut lodges on our Grand Lodge website (that took forever) and I could not find any listing for a lodge in Mystic. Our vacation went on as normal and I forgot about the search until my most recent trip while strolling along the river I saw the building again but this time it had a for sale sign in front of it.
As quickly as I could type "Masonic temple Mystic CT" into my handy dandy, much better enabled phone, I was directed to a story about how the over 100 year old temple had been sold when the lodge merged with another in a neighboring town and had been turned into a couple of million dollar condos and like whenever I read about a temple lost, my heart broke a little more.
It has been happening more and more often as dying lodges grasping at straws to survive simply cease to exist or regionally merge with another lodge and yet another magnificent piece of architecture and  real estate is gone from our once much stronger fraternity. I have often written about it in the past and the realists say that those buildings were only able to be maintained by huge post WWII member numbers and that the reality of our dwindling order is that we should shed these money pits and consolidate and merge in smaller more affordable buildings. The problem I have with this theory is that  most of these exoteric representations of our craft's grandeur were built by lodges in the late 19th and early 20th centuries whose numbers were not incredibly huge and by Brothers who had much less means than we have now. They built or bought these structures because they felt the important work that was being done inside the lodge room should be reflected on the outside as well and they raised a lot of money to do so.
These lodge buildings were usually right in the center of the town or city and could easily be confused with the local town hall where government resided. It must have been truly thrilling for someone back then to knock on the doors of those imposing buildings and finally catch a glimpse of the inside and inquire about what goes on beyond the doors and inquire about how to become a part of such an amazing society that could sustain such an edifice.
Now most Grand Lodges including my own are having local lodges do an "open house " and basically begging the public to come in and see what we do. Not only have we lost many of these incredible buildings, we now are close to pleading people to join. Are these "open houses" akin to the one day classes where a man was promised three degrees in a few hours so they could be handed a dues card as quickly as possible to superficially boost our numbers with more dues paying masons?
The government as an entity locally and nationally has invested a lot of money in preserving and maintaining important structures that represent the greatness of our country because you just wouldn't feel the same way about paying your property taxes or going to court if it were held in some conference room in the back of a Ho-Jo's. I think it is much the same with our fraternity, it is just a little off putting hearing ancient conducted in a conference room or in some cinder block building. Most young men knocking on the West Gate are expecting much more than a six foot wedge and some soda in a hall that has seen way better days. If we are to live up to our vaunted past its time we restore the foundations and return to the earlier days of feasts and pomp and circumstance. Where a lodge wants to be in the most conspicuous impressive structure that garners curious questions without wide open doors.
It is a shame that Grand Lodges do not put away some of the funds that they take from their constituent lodges and set up preservation funds to hang on to some of these buildings for a brighter future or at least out of deference to our fore bearers who struggled to have them erected. because unfortunately once they are lost the order looses a little of its luster and mystery.

Posted M.M.M. from the North Eastern Corner at 11:50 PM No comments:

I hate to write a post like this but I have to write something or I feel as though I will never come out of this funk. In November, like many other Americans, I was laid off from work and it stunk! I was finally doing a job I was proud and eager to share with others and doing it well. I was challenged mentally, physically, and creatively and in one short year had grown so much that I look back now and wonder how I was, how I was before my last job and then the lay-off, which was only to be a short time and has now become ridiculously long. I have never in my life since age 13 spent more time not having a job. The problem is that where before I could just do anything to bring home some money, just some money is not enough to justify my being employed and paying for childcare so I need a certain amount and that certain amount seems like an impossible dream right now. It seems that the middle manager type guy, that I was, has become extinct and now companies have made it up by making lower paid guys and gals take on more responsibility without pay and making higher paid people do more lower work more often.
When the eminent return to work seemed less eminent, I started to apply to jobs that never responded or when they did asked for more than they would return. It seems that todays employment requires 150% and pays 65% with no benefits. I happen to be blessed with being married to a woman who has always carried more of the burden from her hard work and higher education and for our burgeoning family (we were just blessed with our fourth child and a fine strapping lad he is!) her salary, along with my government pittance has kept us above water so far but I am not sure how much longer we can stay afloat.
As for my year in the East, what started out as an incredible success with increased education, incredible camaraderie and lodge growth came to a sputtering stall as we went into our summer break of dimness. I assembled an officer line that I thought would drive us into the next two an a half centuries sidelining some very good friends and brothers who I had though had underperformed during my junior officer roles and promoting a group of my hand picked guys and it mostly back-fired. The guys I sidelined became stellar brothers and a few of my hand picked have stuttered at best.
I tried to lead my old lodge to a new beginning with a carefully thought out plan of buying a new building to call home that mostly fractured all of the fellowship I had worked so hard to flourish. Don't get me wrong, we are much better than we have been but now there are camps of passionate differing opinions vying against each other and mostly me. Some of my most trusted brothers left me in the lurch carrying a torch that I thought I shared with everyone.
So for a while I had a hard time believing in anything, and really still do.
I question my dedication to a quixotic cause of a once powerful lodge, I question my ability as a man to contribute to my family and I question mostly myself.
I have not been able to write because even with the amazing birth of my son I have not felt happy in a long time.
I have just existed.
Existence is not what I was put here to do.
Sorry for the bummer of a post.
I need the sun to rise in the East again.
Posted M.M.M. from the North Eastern Corner at 11:28 PM 2 comments: